A Ted Talk on What makes a Good Life That You MUST NOT MISS! 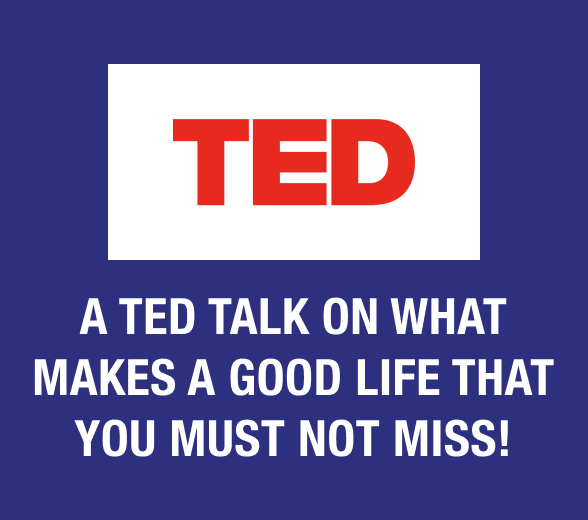 What makes a good life? It is an age old question which has kept philosophers and thinkers engrossed. Is it about getting rich? Or is it about getting famous? More cars? A lavish wardrobe? A million-dollar bank balance?

A survey of millennials asking them about their life goals found that 80% want to get rich while 50 percent want to get famous.

It turns out that none of it matters for a good life. The rich and the fame has nothing to do with your happiness.

Robert Waldinger’s Ted Talk, What makes a good life? Lessons learned from the longest study on happiness takes a plunge into this profound question and come up with data-backed answers.

A Harvard Study of Adult Development tracked the lives of 724 men over a period of 75 years—from 1938 to the present. 60 among those men are alive today and almost all of them in their 90s. It is one of the longest study of its kind with Robert being its 4th director.

The 724 men were divided into two groups. The first group had 268 male sophomores who finished college during the second world war. Most of them went on to serve in the war. The second group had 456 boys from the poorest and disadvantaged neighborhoods of Boston in 1930s.

The research team studied their work lives, their home lives, tracked their personal relationships, conversations with wives, and health including their medical records.

Contrary to our popular beliefs that riches and fame bring good health and life, it turned out that it is good relationships which make our life happy and healthy.

And it can’t be said in words better than that of Robert’s own:

“Well, the lessons aren’t about wealth or fame or working harder and harder. The clearest message that we get from this 75-year study is this: Good relationships keep us happier and healthier. Period.”

He also mentioned that happiness is not about having a lot of friends or relationships. It’s about the quality of the relationships that affect your health. Living in close relationships and communities protect our bodies and brains.

In a world where we are consistently bombarded with the stories of riches and fame, understanding this message will bring relief to many people’s life.

A few tips inspired from the study

Here are a few tips offered by Robert towards the end of his talk:

He also asks a provoking question to the audience. If you have to invest time and effort in your future self, where would you put it? I think you’re better equipped now to answer this question.

So, what makes a good life?

I want to the end the article here, but there’s a Mark Twain quote which Robert ended the talk with. The message would be incomplete without it:

“There isn’t time, so brief is life, for bickerings, apologies, heartburnings, callings to account. There is only time for loving, and but an instant, so to speak, for that.”

END_OF_DOCUMENT_TOKEN_TO_BE_REPLACED

How meditation improved my leadership skills and mental control

END_OF_DOCUMENT_TOKEN_TO_BE_REPLACED

The Key to Employee Motivation: 7 Ways to Find Out What Makes Them Tick

END_OF_DOCUMENT_TOKEN_TO_BE_REPLACED

We have launched 🚀 a business laboratory to grow businesses 🦄