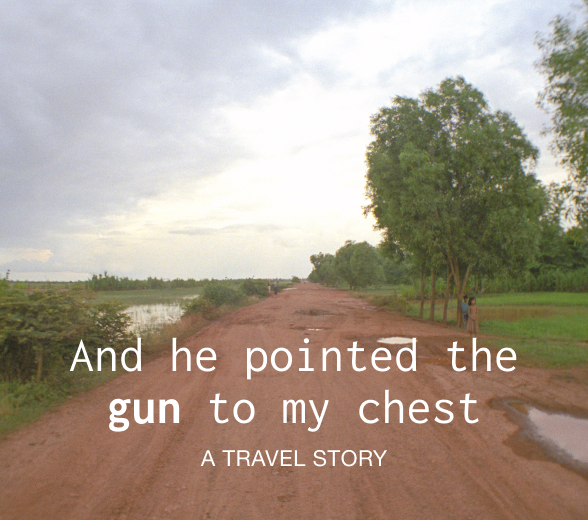 A scary travel story from Asia

1999 one of my best friends Anders and I was traveling around Asia for three months. It was a fantastic adventure. We met great people and made new friends. We saw breathtaking nature and marvelous buildings and spaces. One of our stops was Cambodia and getting there was tough. The country had been at war and conflict for an extended period and was considered to be one of the poorest in the world.

10 hours on the road

Our journey started at the back of a pickup truck at the Thai Border, and we drove for ten long hours on dirt roads until we finally arrived at our destination, Angkor Wat. A temple complex and the most significant religious monument in the world. It was forgotten for several hundred years and rediscovered in the 19th century.

On the way the car broke down two times and still today I don’t have a clue how the driver fixed the issue. The peddle-box seemed broken, and I could not see we had any tools to fix it. At one broken bridge a big red cross truck had rolled from the bridge, and we helped and organized to unload all the rice.

Let me tell you. Walking among these fantastic temples was like being in an Indiana Jones movie, and I loved every second of it. I remember dreaming back and imagine all the people that lived there. I imagined how the elephant highway was in full use and monks walking in groups laughing. A place full of life and activity.

After two days of exploration, it was time to go back with the pickup truck to Thailand. We started our journey, and along the way, there were stops where we had to give money to former soldiers that guarded the road. They were mostly drunk and who knows what terror that have seen and most likely done.

They signaled we should stop

At one stop our driver missed giving money to a guy. A few minutes later a new modern pick up truck with some angry looking guys with guns was driving after us. We noticed it immediately since the other car was driving fast and signaling we should stop. Our driver did not seem to be interested and was driving faster and faster, and our follower was increasing in speed.Eventually, our driver was overtaken by the truck, and it forced us to stop. The angry guys jumped out and ran up to the car pointing the guns at us and wanted to pull us out of the car. I felt extremely confused, and adrenaline was pumping in my blood, and I had a gun pointed to my chest.I guess I was in shock and after a lot of discussions between the driver and the angry mafia guys the situation calmed down, and they got their money. We could continue to drive, and we safely arrived back in Thailand.

Life is an adventure

For me, life is an adventure and just as my story above it is full of amazing and scary experiences. We go through life experiencing love, sadness, anger, shame, and happiness. I believe you need to embrace it all and see it as gifts to help you develop and grow.

END_OF_DOCUMENT_TOKEN_TO_BE_REPLACED

How meditation improved my leadership skills and mental control

END_OF_DOCUMENT_TOKEN_TO_BE_REPLACED

The Key to Employee Motivation: 7 Ways to Find Out What Makes Them Tick

END_OF_DOCUMENT_TOKEN_TO_BE_REPLACED

We have launched 🚀 a business laboratory to grow businesses 🦄